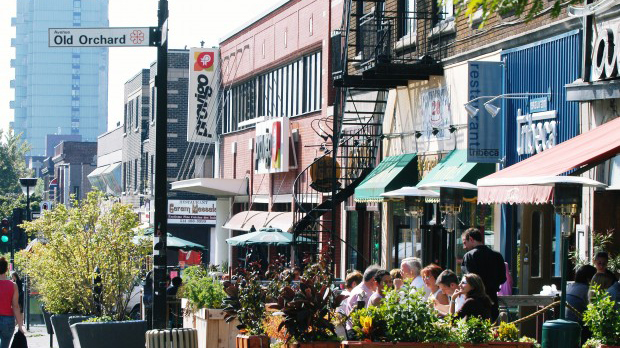 Monkland Village is an up and coming area comprising the general vicinity around Monkland Street, from which it derives its name, within the Notre Dame de Grace (N.D.G) neighbourhood.

The name Monkland Village is fairly recent in its usage, as someone who actually lives in this neighbourhood and has been walking its streets for the better part of 30 years I believe I began hearing the Monkland Village moniker sometime in the late 1990’s and it seems to me that it had something to do with a more marketing focused promotion of the neighbourhood as a highly livable and beautiful but significantly less expensive option to the wealthier Westmount neighbourhood located east of Monkland Village.

Although there are no hard and fast boundaries the area considered to be Monkland Village extends on the east from the Decarie Expressway to approximately Beaconsfield Avenue to the west. And on the North from Somerled Street down to approximately Cote St. Antoine in the South.

I can tell from walking the street daily that the western border of this Monkland Village is slowly spreading since there are continuously new interesting, trendy and exciting new businesses of all types opening up which are attracting more and more people towards the western end of the Monkland Village.

Clearly there is  a hard boundary to the west since the Benny Library and Benny Park occupy both sides of Monkland street at the corner of Cavendish Boulevard and the many residential buildings in the few blocks leading to it, but up to the corner of Grand Boulevard there are still many commercial buildings and businesses on Monkland Street.

Newspaper is your news, entertainment, music fashion website. We provide you with the latest breaking news and videos straight from the entertainment industry.